Celebrating Our Role in History 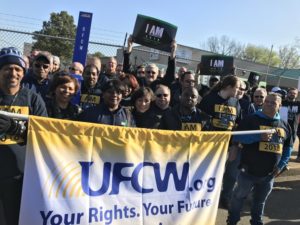 Representatives from the UFCW and RWDSU paid tribute to the legacy of Dr. Martin Luther King Jr. at the I AM 2018 Conference in Memphis, Tennessee. The conference, which was held on April 2nd though April 4th, marked the 50th anniversary of Dr.  King’s death and the 1968 Sanitation Workers Strike, and focused on the continued struggle for social and economic justice.

“Dr. King was more than a civil rights leader,” said Williams. “He was a leader for humanity. He believed that workers should have a voice on the job and earn enough to live with dignity—which was the essence of the “I Am a Man” message of the sanitation workers. While social and economic justice has not progressed for many families in Memphis and the rest of the country, we will never give up. We will continue to honor Dr. King’s legacy by fighting every day to give workers the economic and political power needed to create lasting change.”

President Sheppard talked about the UFCW’s role in assisting garbage-collector-turned-union-organizer T. O. Jones and the sanitation workers in their fight for economic and social justice in 1968.

“Then, we were the Retail Clerks International Association Local 1529 and my father, Leon E. Sheppard, Sr., was the president. He was asked to come to the Memphis Labor Council Hall to listen to 33 Memphis sanitation workers regarding the poverty wages, working conditions and inhuman treatment they endured on a daily basis. Local 1529 helped type individual letters from each worker that were then delivered to the mayor. After the mayor refused to meet with the workers, T. O. Jones led the Memphis sanitation workers on strike. Local 1529 provided office space, paid attorney bills, and fed and assisted the workers any way we could. We kept them going and gave them support and hope until Dr. King came to Memphis and brought their struggle to the national spotlight. And the rest is recorded history,” Sheppard said.