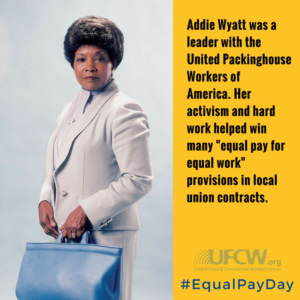 The UFCW will take part in a national day of action to draw attention to pay disparities for women during Equal Pay Day on Tuesday, April 10. The month of April symbolizes how far into the year women must work to earn what men earned in the previous year.

According to the U.S. Census Bureau, women are paid only 80 cents for every dollar a man is paid on a national average. Because women earn less, on average, than men, they must work longer for the same amount of pay. The wage gap is even greater for most women of color.

The UFCW is a member of the board of directors of the National Committee on Pay Equity, which is calling on supporters to wear red on April 10 to symbolize how far women and minorities are “in the red” with their pay. The UFCW will also advocate fair pay for women on social media that day. Please join us in supporting equal pay for equal work on April 10!