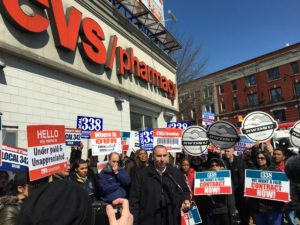 Members of RWDSU/UFCW Local 338 who work at CVS in Brooklyn, New York, called on CVS to negotiate a fair and equitable contract at a community rally on March 15.

The Local 338 RWDSU/UFCW members there have been in negotiations for their first contract since March 2017, but the company has repeatedly rejected reasonable proposals. The CVS in Brooklyn is the first unionized CVS store on the East Coast, and workers there voted to join RWDSU/UFCW Local 338 in August of 2015. The company initially attempted to overturn the results from the union election, but the National Labor Relations Board overruled the appeal and recognized RWDSU/UFCW Local 338 as the workers’ bargaining representative last year.

Since then, RWDSU/UFCW Local 338, along with a committee of workers at CVS, have attempted to negotiate a contract with the company. Currently, there are a few thousand CVS employees on the West Coast, including California, who are also members of the UFCW. The contracts in California provide a number of benefits and workplace protections for both full- and part-time workers, including living wages, health benefits, a retirement plan, and paid time off. CVS rejected RWDSU/UFCW Local 338’s initial proposal for a union contract that is similar to what union members on the West Coast receive. Instead, the company is insisting on keeping the Brooklyn workers at lower pay scales and benefit levels.

“For almost 14 years, I’ve worked hard for CVS, but never felt truly valued by the company, which is why my coworkers and I voted to join Local 338,” said Adrian Caddle, a RWDSU/UFCW Local 338 member working at CVS in Flatbush, Brooklyn. “When I learned that there were union members working at CVS on the West Coast, I was glad to hear about the guaranteed wage increases in their contracts that weren’t based on store location or individualized reviews. But there hasn’t been any relief because CVS doesn’t take us or our requests seriously. I am going to be in this fight with my coworkers until we are treated equally as other CVS workers.”

“We are extremely disappointed and frustrated that CVS has shown a total disregard for the men and women working at the CVS in Flatbush from the time that these workers voted to unionize,” said John R. Durso, president of RWDSU/UFCW Local 338. “There has been a precedent set by UFCW locals on the West Coast for a strong union contract that provides workers at those CVS stores with living wages, paid time off and a number of other benefits that the company is denying the workers in Flatbush. This has left us to ask why California and Oregon, but not New York? These hard-working men and women also live in a high cost area and are no less deserving of the opportunity to provide for their families.”

“CVS workers in Brooklyn need dignity and respect on the job – and we won’t back down till they get it,” said David Mertz, New York City director of the RWDSU. “Just because workers live in different states doesn’t mean they should be treated any differently. CVS’s utter refusal to even hear the needs of our members is disgraceful and they should be ashamed.”