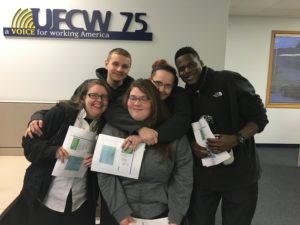 The three-year and four-month agreement raises starting wages to at least $10 per hour and accelerates wage progressions to $11 per hour after one year of service. The agreement also includes affordable health care, and continued investments in the workers’ pension fund.

“UFCW Local 75 strives to negotiate contracts that secure better wages and affordable benefits, providing a voice for hard-working men and women and strengthening our communities, and this contract does those important things,” said UFCW Local 75 President Kevin Garvey.