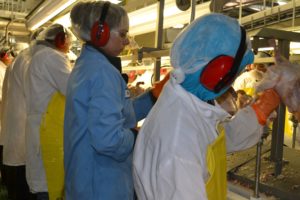 Thousands of UFCW members who work in poultry plants sent comments to the USDA about the dangers of this petition. The UFCW also sent letters in October and December of 2017 to the USDA that highlighted how risky the NCC petition to eliminate line speeds would be for both workers and consumers.

“This decision is a victory for hard-working poultry workers who hold one of the most dangerous and difficult jobs in America, and the consumers who depend upon them to provide chicken that is safe to eat. However, we remain concerned that poultry companies can request line speed waivers for individual plants.

“In addition to putting poultry workers at greater risk of injury, eliminating line speeds puts consumers at risk by making it more difficult for both federal inspectors and quality control workers to properly check birds for contamination.

“It was unbelievable to see major poultry industry groups ignore these well-known risks and lobby the USDA to eliminate line speeds.”