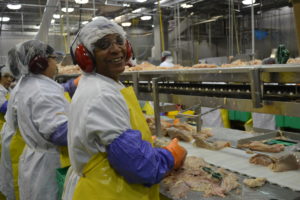 On Dec. 7, UFCW International President Marc Perrone issued a statement in response to a new report from the Government Accountability Office (GAO) regarding safety and health in the poultry industry. This report confirms that the U.S. Department of Agriculture doesn’t consider worker safety when allowing new and dangerous chemicals to be used in poultry plants, and that OSHA can’t or won’t adequately protect poultry workers from injury. The GAO also found a pattern of poultry companies repeatedly denying access to federal safety and health inspectors, leaving workers in at least 15 plants across the South working in potentially dangerous environments.

This report supports findings by Oxfam that poultry workers struggle to get adequate bathroom breaks, even to the point of endangering their health. Other GAO reports in 2005 and 2016 also found significant problems with safety and health in the poultry industry.

“The hard-working people who work in poultry plants have some of the most dangerous and physically demanding jobs in America. This report sadly confirms that many of these skilled professionals who keep our food safe are struggling to keep themselves safe at work. They have earned and deserve better.

“The dangers endured by poultry workers that are highlighted in this report also underscore why a recent request by the National Chicken Council to increase line speeds defies common sense and is being clearly driven by greed. We urge the U.S. Department of Agriculture to take this report seriously and reject that request so that poultry workers and the food we all consume can be kept safe.”