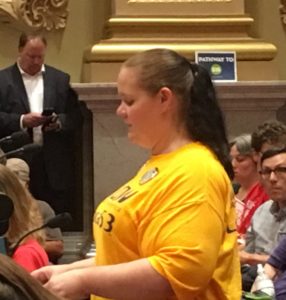 On June 30, the Minneapolis City Council passed a municipal minimum wage ordinance that will require businesses in Minneapolis to phase in $15 per hour over five to seven years, depending on the size of the employer. UFCW Local 653 played a significant role in passing this ordinance, which will affect over 70,000 low wage workers in Minneapolis.

UFCW Local 653 joined the Raise Retail Campaign that ran in 2014 through 2016 along with $15Now, CTUL, NOC, CPD, Working America, and the Minneapolis Regional Labor Federation, among others, to gauge and raise awareness about the $15 an hour movement, fair scheduling, and sick and safe time in Minneapolis. The organizations worked together to blitz big and small retail stores in the Twin Cities surveying workers for support of these ideas. UFCW Local 653 sent out S.P.U.R.s (Special Project Union Representatives) and staff to these stores to help survey workers.

On June 22, UFCW Local 653 members Sondra Williams and Courtney Huber, who work at Cub Foods, and Jeff Livingston, who works at Hirshfield’s Uptown, testified in support of the $15 an hour ordinance during a Minneapolis City Council public hearing.

“I work part-time in the deli department and I have two part-time jobs,” Williams said. “I’m a single mom struggling to raise three beautiful children. Imagine not seeing your kids because you work two jobs. I’m doing the best I can. Fifteen dollars an hour would not only help me and my family out, but it would help others who are struggling as well.” 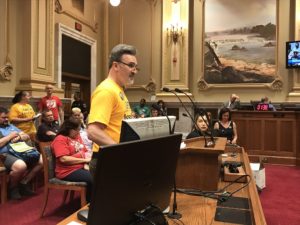 “After 15 or 16 years in the screen printing industry before this current job, I realized that low wages are part of a systemic problem,” said Livingston. “Where the rich get richer, and working people like me have to work harder and harder for scraps. Although the ordinance sees $15 fully realized in 2025, I see $15 an hour as a baseline of what minimum wage should be today.”

“I make $14.25 an hour, and have a couple of other part time jobs, because, well, you gotta do what you gotta do to pay the bills. It’d be nice not to struggle as much,” said Huber. 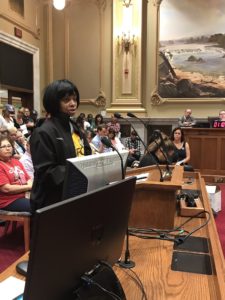 As the momentum of the $15 an hour campaign built, it helped UFCW Local 653 to organize Eastside, Linden Hills and now Seward Community Food Coop in Minneapolis.

Looking forward, workers can use the win in Minneapolis to demand $15 per hour at UFCW Local 653 co-op bargaining and in larger retail contracts down the road.