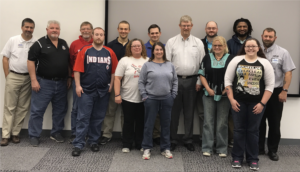 On May 9 and 10, members who work at Meijer in five locations in Ohio (Bowling Green, Defiance, Delaware, Marion and Marysville) ratified two new contacts. The four-year contracts include increased paid time off, a rollout of a new wage structure that provides wage increases at multiple levels for the employees, and advanced 10-day scheduling.

The contract also adds greeters to the union membership, and provides an easier path for part-timers to qualify for full-time status. During the ratification, members of the Negotiation Committee (UFCW Local 1059 representatives and Meijer employees) worked together to ensure members who came out to vote fully understood the contract and how it would impact their lives.

On June 20, members who work at General Mills in Jackson, Ohio, ratified a new contract by an overwhelming margin. The four-year contract includes wage increases, affordable health care plans with a significant premium freeze, company-provided safety equipment with greater employee choice, and better opportunities for senior employees to be granted overtime in shorter shifts. The contract also includes a 401k plan that provides substantial employer contributions for all members, giving members the flexibility to invest their money in a variety of ways and potentially grow their retirement funds faster than their previous pension plan.