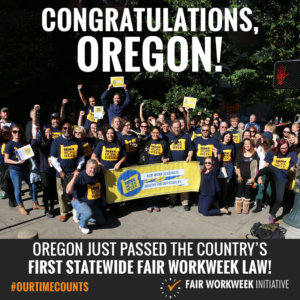 On June 29, the Oregon House of Representatives passed the Fair Work Week Act (Senate Bill 828), the first statewide law which provides workers with more stable schedules. Members of UFCW Local 555 played a big role in the passage of this legislation.

The Fair Work Week Act requires food service, hospitality, or retail companies with 500-plus employees worldwide to provide employees in Oregon with written work schedules at least seven days in advance as of July 2018, and at least two weeks in advance as of July 2020. If schedule changes are made close to or on the day of the workers’ shift, employees must be paid for half of the hours not worked when they were scheduled but then cancelled, and one additional hour of pay when hours are added by the employer without notice.

Members of UFCW Local 555 played an integral role in the process of passing Senate Bill 828 through the Oregon State Legislature. After the most recent round of negotiations in which employers refused to deal with members’ scheduling concerns as a part of their contract, this law became the top priority of UFCW Local 555’s Active Ballot Club (ABC). Members raised ABC funds to support the fight, educated fellow coworkers about how a law like this could make workers’ lives better, and attended numerous Lobby Day events during which they took part in over 100 individual meetings with legislators from both sides of the aisle.

“All of us deserve more than a couple days’ notice of our work schedule,” said UFCW Local 555 President Dan Clay. “How else can you plan childcare? Go to school? Schedule medical appointments? Hold down a second job? Without at least some notice of upcoming schedules, workers can’t live their lives or adequately plan for their families. Oregon’s Fair Work Week bill is a common sense solution to an everyday problem facing workers in every town, city, and state across America.”