Locals 455, 540 and 1000 Stand Together to Defeat Anti-Union Legislation in Texas 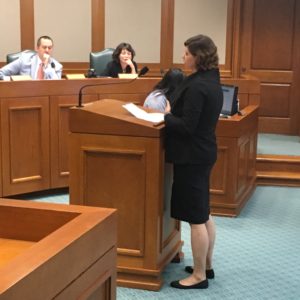 Legislation that would require parental consent for a minor to join a labor union in Texas (SB 75, HB 1987) died in the Texas legislature on May 21, due in large part to the work of members at UFCW Locals 455, 540 and 1000. The three locals shared resources and political connections and lobbied together to achieve this vital victory.

Cassidee Griffin, a 24-year-old Kroger employee who joined UFCW Local 1000 when she was 16 years old, testified against the legislation in April.

Griffin, who has recently performed field organizing work for the Texas AFL-CIO, said 16- and 17-year-old workers at Kroger are trusted to handle cash, return lost children to their parents, and dodge reckless drivers in the parking lot. “They ought to be trusted by elected leaders in Austin to voluntarily join a union, if they choose,” Griffin said.

“It’s their choice to join or not, and it shouldn’t be taken away from them,” added Elmo.