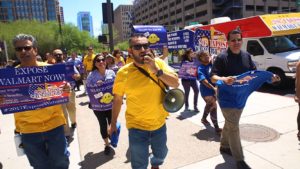 Making Change at Walmart (MCAW) launched its “Expose Walmart” tour in Phoenix on May 15 to highlight the retail giant’s low wages, poor benefits, waste of taxpayer dollars, and other negative community impacts.

State Representative Richard Andrade (D-Glendale) attended the tour’s kickoff event in Phoenix, and expressed concern about the number of calls local police receive from Walmart stores at expense of local taxpayers in an interview with The Arizona Republic.

“We all know the city of Phoenix, as well as many Arizona cities, are experiencing a police shortage,” Andrade said. “So (by) Walmart refusing to address these issues, that means these police officers — who should be in our community — are busy responding to incidents at Walmart …”

MCAW’s “Expose Walmart” tour includes over 30 cities in 22 states and will end at Walmart’s annual shareholders meeting in Fayetteville, Ark., on June 2. During the tour, MCAW staff will meet with local community leaders, workers, taxpayers, and elected officials to discuss real solutions to Walmart’s drain on our communities.

“This tour is about telling the real story about what Walmart workers really make and uncovering the billions of dollars in corporate welfare Walmart receives from American taxpayers all across the county,” said MCAW Campaign Director Randy Parraz. “The time has come to get Walmart off corporate welfare by demanding that full-time workers get a living wage. Given the billions in profits Walmart makes each year, no one working full-time at Walmart should qualify for public assistance.”