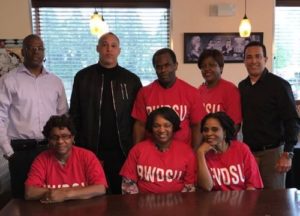 On April 28, nursing home workers at Genesis Woodlands in Plainfield, N.J., voted to join the RWDSU/UFCW. The unit consists of over 40 certified nursing assistant employees.

To combat a pattern of disrespect in the workplace, Genesis Woodlands employees began organizing themselves, speaking with each other about the benefits union membership brings. The employees were fed up with losing benefits, working 12 to 15 months without wage increases, short staffing, extremely high and unaffordable health care benefits, intimidation and harassment by certain supervisors, favoritism, and most of all, the lack of dignity and respect from management.

“We knew we deserved better and decided that we needed change, representation, a voice on the job and job security,” said Marie Joseph, a Genesis Woodlands certified nursing assistant.

Workers were enthusiastic, and quickly created a strong and outspoken organizing committee, which faced a brutal anti-union campaign.

Workers were bombarded by daily letters, one-on-one meetings, captive audience meetings, threats of strikes and other threats throughout the campaign by Genesis Woodlands corporate representatives.

“It didn’t affect them – these workers were dedicated and wouldn’t be denied,” Hall added.