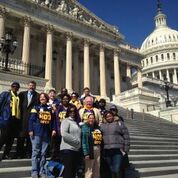 Last week, more than 35 UFCW Local 400 members went to the U.S. Capitol to discuss the Republican plan to replace the Affordable Care Act, immigration raids, and national “work for less” legislation with members of Congress from Maryland, Virginia, and West Virginia.

“I’ve seen patients who just got health insurance for the first time; that’s what enabled them to come in and get care,” Pistolessi said. “We can’t take that away from them. We need to make health care more affordable, not less.”

Pistolessi also offered a personal account about why immigration raids are so damaging.

“My family came to this country from the Dominican Republic when I was six years old,” she said. “My father was going to be assassinated and came here as a political exile. Before we left, our neighbors were raided and it was very scary—I could hear the screaming. No one should ever have to go through that—especially here in the U.S.” 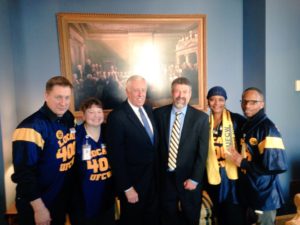 “I became a U.S. citizen eight years ago,” she noted. “I had to work really hard to get my citizenship. We need to make it possible for others to follow the same path.”

Andy Keeney, who works at Kroger in West Virginia, spoke with several senators and representatives about why a national “work for less” law would be such a bad idea. “In my meetings, I just explained how strong unions help every community in America,” Keeney said. “We bring people a voice in their workplace, better wages, better working conditions, better health care – a national “work for less” law would only make it more difficult for people to earn those good things.”

As the day came to a close, UFCW Local 400 members were happy with how their meetings went and were excited that they were able to bring a big crowd in UFCW blue and gold to the halls of power.

“My favorite part about today was showing senators and representatives that we’re a strong, unified group,” said Anita Carpenter, who works at Kroger in West Virginia. “When we come here all together, it gives us a larger voice to speak about the issues we care about – like better wages and better working conditions. P 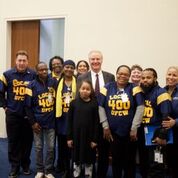