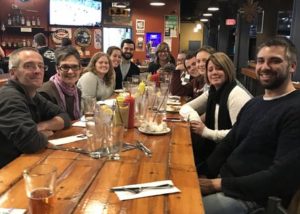 On Jan. 26, workers at Whole Foods Co-op in Duluth, Minn., voted 43 to 42 to join the UFCW Local 1189. The official vote tally was initially held up because seven ballots were challenged based on supervisory status. The challenged votes have now been determined by the National Labor Relations Board to be management, and therefore will not count in the final results.

After the results are certified, the new UFCW members will begin the process of electing a bargaining committee from among their coworkers and creating an initial contract proposal for contract negotiations.

“The organizing committee worked really hard even though management was working every day to make people afraid.  I am so proud of them for sticking together despite the fear tactics,” said Diana Tastad, the lead organizer on the campaign.

“I’m personally thrilled that we finally have the representation all ‘at-will’ employees deserve to have,” said Rob Leanord, who works in the deli at the Hillside location. “I’m glad to know that all of the coworkers I care about now have representation against the potential downside of ‘at-will’ employment. I’m overjoyed that now there will be a fair and clear dialogue for us as workers that will allow us to have a real say in our co-op once again.”

“What I feel we have accomplished is securing a path for a worker’s voice to be heard; for restoring the democratic process to our employment; and protecting our employee rights as a cooperative business was needed,” said Terese Elhard, who works as a produce clerk.

Jennifer Christensen, president of UFCW Local 1189, said, “Once the results are certified by the labor board, the UFCW hopes to start the negotiation process by sending comprehensive surveys to all new members and by holding meetings to brainstorm and discuss ideas.”