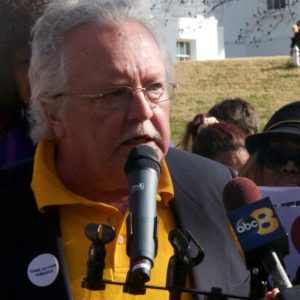 On Jan. 12, members of UFCW Local 400 joined a bipartisan coalition of elected officials, immigrants and low-wage workers at a rally outside the state capitol in Richmond, Va., in support of raising the minimum wage to $15 per hour. Participants at the rally also supported a measure to authorize driver’s licenses to immigrants working in Virginia.

Raising the minimum wage is an important issue for members of our union family. “I’ve seen the anguished look on the faces of my coworkers when they can’t pay their bills,” said Rick Howell, a grocery clerk from Roanoke and member of UFCW Local 400. “The fight against corporate greed is the most important. The middle class is disappearing fast.”

“Every job in Virginia should be a good job,” said Lt. Gov. Ralph Northam. “I know first-hand, it is impossible for Virginians to not only support themselves, but much less to support their families on $7.25 an hour. It’s time to give yourselves a pay raise.”

“Poverty knows no race, no color, no gender,” said Richmond Mayor Levar Stoney. “I’m committed to the principle that everyone has an equal opportunity. That means a $15 minimum wage.”