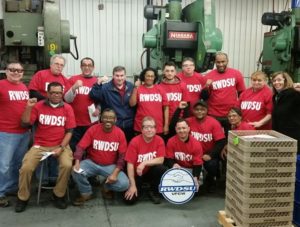 In December, workers at A.T. Wall in Warwick, R.I., voted to join RWDSU/UFCW Local 599. The workers, who produce magazines for military weapons, join their coworkers in other units of the company who are members of RWDSU/UFCW Local 599, thanks to a successful organizing campaign.

The workers were concerned about low pay and not having enough time off, and enthusiastically took part in the organizing drive. After a brief negotiation period, these workers are now covered by the same contract as other A.T. Wall workers. That means the new members will see raises of almost $1 per hour instantly, as well as getting the additional paid vacation and sick days they were seeking. The current contract runs through the end of 2018.