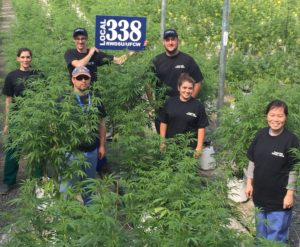 In September, two years after medical marijuana was passed into law in New York, workers at Vireo Health ratified their first RWDSU contract. The Vireo Health workers are members of RWDSU Local 338, and this union contract is the first in the history of New York state’s new medical cannabis industry.

The new three-year contract covers workers at Vireo Health’s cultivation and manufacturing facility in Fulton County and at all four of its dispensaries located in Albany, Johnson City (Binghamton), Queens and White Plains. The contract will provide workers with paid time off for holidays, sick days, and vacation, as well as bereavement leave. Workers will receive retirement benefits through an annuity fund that the company is paying for. Full-time workers will also be receiving medical coverage for themselves and their families under the contract. The agreement also includes “profitability milestones” for workers that will kick in as the patient base increases and the company becomes more successful.

“As someone starting a new family, it’s great to have the security and stability of a union contract,” said Vireo Cultivator Matt Denten. “I’m proud to be working in the medical cannabis industry and know that my work is helping patients live meaningful lives. My coworkers and I all agreed that we wanted to be represented by Local 338 to make sure that we were protected as workers and had good benefits and wages.”

“The strong union contract approved by the workers at Vireo will ensure that they have secure, middle class jobs so that they can provide for themselves and their families,” said RWDSU Local 338 President John Durso. “This agreement provides these dedicated workers peace of mind that will allow them to focus on what matters most: helping those who are suffering and creating quality medicine.”

RWDSU Local 338 was at the forefront of the medical marijuana movement in New York state, working with legislators to craft legislation that would help patients and protect workers in the new industry. A bill legalizing the production and sale of marijuana for medical purposes was signed into law in New York in 2014, and in part due to the efforts of Local 338, the medical marijuana companies were required to have labor peace agreements where they wouldn’t interfere with workers’ efforts to join a union.