Last week, the U.S. Census Bureau released a report showing that incomes increased for middle- and low-income families in 2015—the biggest increase in decades since the agency began tracking this measure in 1968. According to the report, real median household income was $56,500 in 2015, up from $53,700 in 2014, an increase of 5.2 percent.

The increases were seen in households on all ends of the economic spectrum, but the biggest raises were for families led by those in the 35 to 44 age range. While this is good news for workers in cities that saw an income increase of 7.3 percent, median incomes did not grow significantly in rural areas. In addition, the South had weaker income growth than the West. 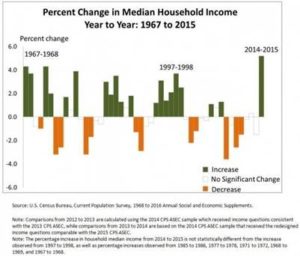 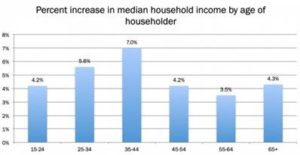