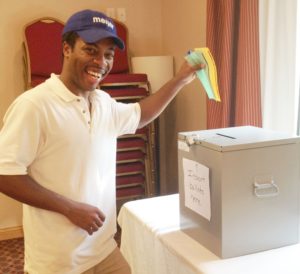 Over 27,000 Meijer workers in Grand Rapids, Mich., who are members of UFCW Local 951, ratified new contracts in mid-August.

The four-year contracts cover workers in Meijer’s retail, distribution center/transportation and retail facilities, and include wage increases, additional paid time off, increases in the company’s match to 401(k) plans, improved scheduling language, and a greater opportunity to obtain full-time jobs and transfer into higher paying jobs.

“These are the best contracts we have negotiated with Meijer in over 30 years. They were unanimously recommended by the members on the bargaining committees and soundly ratified by the membership,” John Cakmakci, UFCW Local 951 president and chief union negotiator for the talks, said. “Not only are all members receiving wage increases, but the length of time it takes them to get to top rate was reduced as we worked to close the gaps in the wage scales. We improved health benefits, while dramatically cutting the employee contribution for part-time workers and minimally increasing the rates for full-time workers and negotiated contract language that strengthens members’ seniority rights.”

“Last year, we surveyed the membership regarding their goals for these negotiations. The contracts we negotiated achieved their goals and position us well to make even greater gains in four years,” Cakmakci added. “I look forward to working with the company to improve the lives of the UFCW 951 members working at Meijer.”