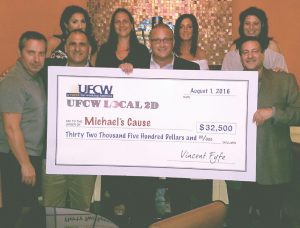 On April 25, UFCW Local 2D held its “Stand Up for a Cure” golf outing in Staten Island, N.Y., to support Michael’s Cause, a local charity. This year’s golf outing raised $32,500 for the charity, which raises funding for research for Duchenne muscular dystrophy and was founded in honor of ten-year-old Michael Capolongo, who suffers from the disease.

Local 2D has been involved with Michael’s Cause since 2012, and has raised over $100,000 for the organization in the last four years. Local 2D has a long history of giving back to the local community, including helping children with disabilities through the AHRC Foundation, and assisting children of other countries through the Boys’& Girls’ Towns of Italy.

“As a local union, we are responsible not only for our membership and their families, but we feel we have an obligation to pool our resources and use the collective voice we have to raise money and donate our time for those that are in need,” said UFCW Local 2D President Vincent Fyfe.