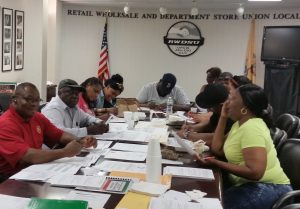 Last week, workers at the Transdev company in Essex County, New Jersey, ratified their first RWDSU contract by an overwhelming margin. The Transdev workers include minibus and van drivers, along with schedulers and reservationists, who transport seniors in Essex County.

The Transdev workers joined the RWDSU last year to address an unaffordable health care program, low wages, and limited time off with benefits. The new contract addresses these issues.

“The concept of a union was all new to me. I had an opportunity to sit at the bargaining table as an equal with management and discuss the concerns of the drivers. At the end of the negotiations, we made several improvements that could be measured,” said Transdev employee Tawana Smith.