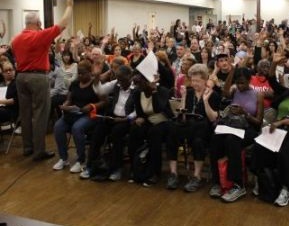 Last week, over 5,000 unionized Macy’s workers at four stores in the New York City area overwhelmingly ratified their new four-year contract. Workers at the stores voted via a secret ballot with a 97.5 percent approval. A strike was averted when Macy’s and RWDSU Local 1-S negotiated the new contract.

The new agreement includes the following key provisions that will boost Macy’s workers and improve the quality of their jobs: substantial wage increases; a better and more affordable healthcare plan; and fair schedules, including no mandatory requirement to work on holidays, such as Thanksgiving and Christmas.