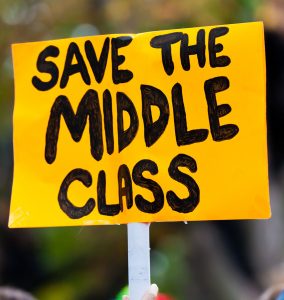 The American middle class is losing ground in major metropolitan areas, according to a new report from Pew Research Center.

The report, titled America’s Shrinking Middle Class: A Close Look at Changes Within Metropolitan Areas, shows that the share of adults living in middle-income households fell in 203 of the 229 metropolitan areas in the U.S. between 2000 and 2014, while shares in the upper and lower-income tiers have increased. The report defined middle class households as those making roughly between $42,000 and $125,000 a year for a family of three in 2014.

A full copy of the report can be found here.