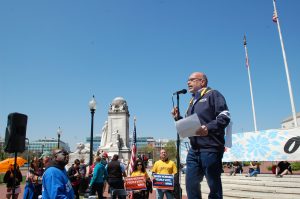 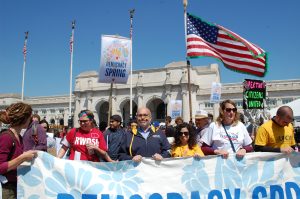 On April 14, Stuart Appelbaum, executive vice president of the UFCW and president of the RWDSU, released the following statement after being arrested with close to 100 others on the steps of the U.S. Capitol in an act of civil disobedience. The powerful sit-in was the fourth consecutive day of arrests at the Capitol of people who are peacefully asking Congress to end the big-moneyed corruption of our political system.

“Whether we are Republicans, Democrats or Independents, we can all agree that wealthy special interests have too much power in deciding who can run for office and what policies they’ll consider once they are elected.

“These dark money forces are doing everything they can to discourage the voices of ordinary people from being heard. State by state, they are convincing legislators to install strict voter ID requirements, reduce polling hours and even eliminate polling locations. The purpose of these restrictions is clear – they want to make it harder for people to vote so that their anti-worker agenda can continue unchecked.

“In our fight to bring hard-working families the better life that they deserve, the entire UFCW union family has seen firsthand how corporate special interests use massive campaign contributions and super PACs to rig the game in their favor. This pay-to-play campaign finance system is a big reason why living wage increases are blocked, family leave laws fail and paid sick time proposals go nowhere.

“There is something deeply broken about a political system that’s working great for well-connected insiders and the wealthy, but not for the rest of us. People from all backgrounds are tired of seeing wages stagnate, trade deals that harm workers fast tracked through Congress and voting rights restricted while the wallets on Wall Street bulge.

“Members of Congress must take notice of the thousands who chose to be arrested this week and act immediately to repair our democracy by passing meaningful campaign finance reform that will guarantee every voice is heard and every vote is counted. The status quo is failing hard-working American families and it cannot continue.”