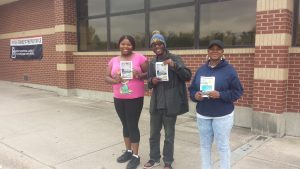 On April 15, Making Change at Walmart announced the release of a national television ad, along with coordinated actions in over 75 locations, to discourage customers from spending their tax refunds at Walmart because of the company’s use of offshore tax havens.

The ad aired on tax day, which was April 18 this year. At the same time, over 75 actions took place at post offices and Walmart stores across the country, including those in Dallas, Chicago, San Francisco, Boston, Phoenix, and Washington, D.C.

Last year, Americans for Tax Fairness released a report detailing how Walmart has at least 76 billion dollars in assets placed in subsidiaries in places like Luxembourg, the Cayman Islands, and Barbados. Last week, Oxfam released an analysis of the 50 largest U.S. corporations, finding that Walmart ranked among the worst in terms of number of subsidiaries in tax havens.

“It is well-documented that Walmart has billions stashed in offshore tax havens, presumably to avoid paying American taxes. A company like that doesn’t deserve one cent of your tax refund,” said Jess Levin, communications director for Making Change at Walmart. “We’ll be going from post office to post office to spread the message that while hard-working Americans are waiting in line to file their taxes, Walmart is finding ways to avoid paying theirs.”