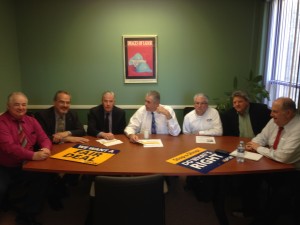 Last week, International President Marc Perrone called a meeting with the UFCW locals who represent the thousands of our union brothers and sisters employed by Ahold. Leadership from a dozen local unions met in Little Falls, N.J., to discuss the collective interests of 75,000 Stop & Shop, Giant, Martin’s and Peapod members.

The local presidents worked together with President Perrone, Region 1 Director Tom Clarke, Region 2 Director Al Vincent, and International Executive Vice President and Director of Collective Bargaining Kevin Williamson to strategize and develop a bargaining plan that will keep 12 locals unified in the mission of securing a better future for the hard-working men and women who make Ahold successful.

Stop & Shop’s unfair contract proposals in New England have engendered a new solidarity across local unions and across regions. Local 464A is scheduled to begin bargaining with the company on April 7, and has pledged not to sign a deal with the company until Stop & Shop gives New England members a fair deal.

This week, the New England locals will host a rally in Providence, R.I., for all the working people of Ahold that will bring together members from Stop & Shop, Giant, Martin’s and Peapod, as well as members from Massachusetts, Virginia, and from all states in between, to deliver one clear message to the company: In the UFCW, we all stand together, and no local union bargains alone.

Our brothers and sisters in New England have the full support of all the Ahold local unions and the full support of the International. Together, we will secure a fair contract that rewards the hard work of those who make Ahold successful and profitable.