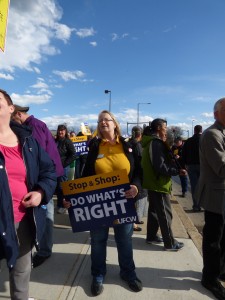 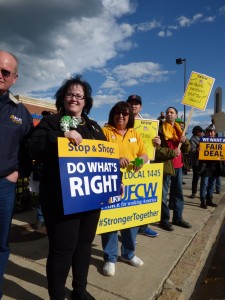 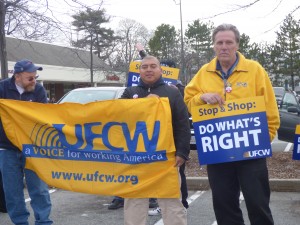 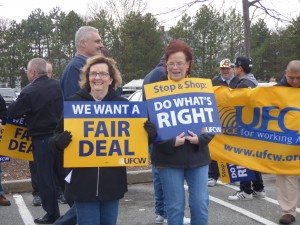 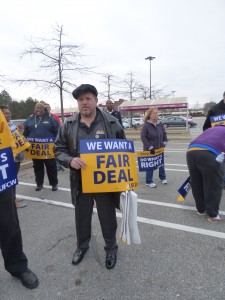 While their bargaining committees slowly make progress in negotiating a fair deal with the company in Providence, Stop & Shop workers in Massachusetts held two major rallies last week, building power and support for their contract campaign. As part of a unity bargaining initiative, the members of five UFCW locals have come together to fight for a fair contract that rewards the hard-working men and women who have made this company successful.

The crowd that turned out for a rally in Quincy, Mass., tripled organizers’ expectations as workers brought family members and customers and community members joined in to call on Stop & Shop to provide a fair deal and better life for its employees.

The following day, neither a rain storm nor Boston’s famous St. Patrick’s Day celebrations could keep supporters away from a rally in Dorchester. Hundreds turned out to make their voices heard on the same day that the company returned to the bargaining table to resume negotiations. When workers were asked to take their rally off of store property, the Boston Police helped close down a lane of traffic to make room for crowds that overflowed the sidewalk.

Senator Edward J. Markey (D-Mass.) put the coordinated effort of the New England Stop & Shop workers to stand strong for a fair contract in perspective: “As the income gap in our country continues to grow and the middle class gets hollowed out, it is imperative that our labor unions take this fight to every negotiation where the potential for economic injustice is a real possibility.” In a statement to the workers, Sen. Markey wrote, “I am proud to support the hard-working men and women of the UFCW in their fight for a fair wage, fair benefits and the workplace respect they deserve.  I commend you for holding strong in your principles, not only for the protection of benefits in the short term, but also for the strength of your union for generations to come.”

Five UFCW locals, Locals 328, 371, 919, 1445 and 1459, representing 35,000 Stop & Shop workers, have been in negotiations with the company since early January. Supported by their customers, the hard-working men and women at Stop & Shop have been calling on the company to stop its threatened cuts to benefits, offer fair wages, and do what is right for the community.