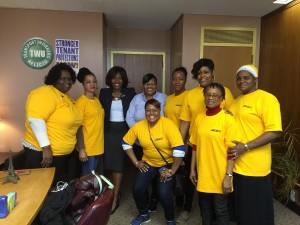 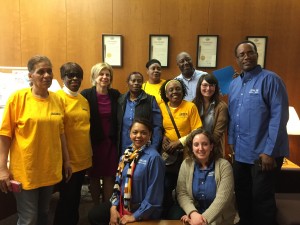 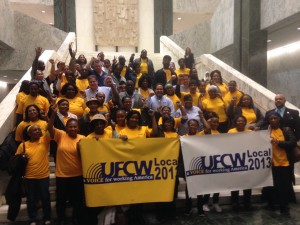 They met with legislators and staff from 23 Assembly and Senate districts, including the New York State Assembly Speaker Carl Heastie.

“Many of our members rely on the state to fund their contract increases,” said Local 2013 President Mark Carotenuto. “That’s why it’s so important that legislators hear from our members directly.”

Una Brown, a Local 2013 member and Executive Board vice president, works as a home health aide at Americare. “I love my work, but the pay is not enough,” Brown said. “Many of my coworkers have to sign up with two or three agencies to make a living.”

In New York City, one out of every seven low wage workers are employed as a home care aide. The hourly mean wage for home health aides is approximately $10.75 per hour, or $22,360 a year, in the state.

Home health aides would see a $5,000 per year raise if hourly wages are increased to $15 per hour.

Raising wages would reduce employee turnover and lower dependence on public assistance. According to a State Senate report, 56 percent of direct care workers in New York State receive some sort of public assistance.

Local 2013 and RWDSU Local 338 have been strong backers of the Fight for $15 in New York State for years, participating in lobby meetings, rallies, and marching in the streets with other local unions and community groups.

But since health care reimbursements are set by the state, Carotenuto said, increases in minimum wage have to be matched with increases in Medicaid and other state programs. “The legislature needs to step up and fund an appropriate budget,” he said.

They are hopeful that their visit to the Capitol in Albany will make a difference with legislators who may be on the fence and are committed to lobbying again later this year.