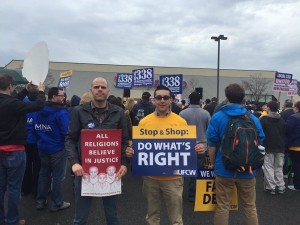 Last week, hundreds of Stop & Shop workers, customers, community leaders, clergy and union members gathered in Braintree, Mass., to call on Stop & Shop, and its parent company Ahold, to provide a fair deal and a better life for its employees. New England Stop & Shop workers are currently working under an expired union contract while the profitable company insists on cuts to hard-earned benefits.

“Stop & Shop’s proposals show that the company has strayed from its core values,” said Tim Melia, president of UFCW Local 328. “This used to be a company that took pride in offering the best wages and benefits in the region, and attracting the best workers. Our members are only asking for their fair share of the success their hard work has built.”

The rally came after Stop & Shop’s parent company, Netherlands-based grocery giant Ahold, released its latest financial statement, earning in excess of $10 billion last year. Following the company’s refusal to acknowledge its responsibility to provide good wages to their hard-working employees, workers plan to reassert their right to speak out for a better life.

“As a former member of UFCW and of the original Stop & Shop family, I stand, in solidarity, to support the rights of the workers to the good pay and good benefits they deserve,” said Deb Goldberg, treasurer of Massachusetts, whose family founded Stop & Shop in 1892. Stop & Shop remained a family-owned business until the 1980s.

Supported by their customers, the hard-working men and women at Stop & Shop have been calling on the company to stop its threatened cuts to benefits, offer fair wages, and do what is right for the community.

“When I started working here, Stop & Shop was my path to the American Dream – a house, a future for my family. But with the company’s current proposals, that dream will be out of reach for my coworkers,” said Barbara Begley, who has worked for Stop & Shop for 33 years. “We take great pride in the work we do to serve our customers and communities. Stop & Shop should do what is right and accept a fair deal.”

For a copy of Senator Warren’s letter, please visit http://www.ufcw.org/warrenstandswithus/