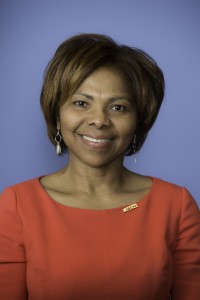 As Black History Month comes to a close, UFCW International Vice President and Director of the Civil Rights and Community Action Department Robin Williams shared her thoughts about the important relationship of the labor movement and the achievements and contributions made by African Americans.

What does Black History Month mean to you and why is it so important?

Black History Month is about celebrating and being proud of being Black in America. It is a time where we celebrate the contributions that African Americans, past and present, have made in our society. Our country’s rich history has been deeply impacted by so many groups and it’s important we celebrate everyone’s contributions in order to create a tradition of acknowledgement, inclusion and community engagement. By remembering and celebrating our history, we can build awareness on the struggles and challenges that African Americans have faced and inspire a new generation of civil rights and social justice leaders.

How and why did you become involved with the labor movement?

I was born in 1964 in Washington, D.C. and the labor movement, like the civil rights movement, has been a huge part of my family’s history. My father was a minister and supporter of Dr. King and the Southern Christian Leadership Conference. During the 1970’s, he worked for Raleigh’s Clothing Store and Woodward & Lothrop Department Store, which were both represented by The Retail Clerks Local 400, which later became UFCW Local 400. I remember my dad talking about the union organizing campaign and how solidarity and joining the union was so important for the advancement of Black people. It was because of his union job that my father was able to purchase a home and raise his family in a middle class neighborhood in Washington, D.C.

The 1970s in Washington, D.C. was a time where African Americans were gaining more opportunities to land full-time jobs in local and federal government, as well as in healthcare and other public and private sector jobs. With the increase of union organizing in these sectors, worker solidarity and union membership had quickly become the greatest pathway to the middle class for African American workers.

By the time I was hired as a part-time food clerk for Georgetown Safeway Food Store in Washington, D.C. in the early 1980s, the labor movement was a part of me. I got involved in my union, UFCW Local 400, after organizing a delegation of part-time employees to meet with store management in a demand for fair scheduling. I went on to become an assistant shop steward and then I joined Local 400 as a full-time organizer and led the healthcare team in organizing hundreds of healthcare workers in Southern Maryland and Virginia. I joined the UFCW International staff as Associate Director of Civil Rights and Community Action in 2005.

What suggestions do you have for other African Americans who want to become more involved in the labor movement?

I am grounded in my faith, my family, and in my union. My faith teaches me that the most important thing in life is love. My family keeps me connected to who I am and my culture and my union allows me to be in solidarity with mankind and to serve others.

There are many ways to get involved. If you are a union member, you can start by attending membership meetings and learning more about the activities of your union. You can also volunteer for union organizing campaigns, workplace actions, social media campaigns, participate in Get Out the Vote campaigns, run for union shop steward or run to serve on your contract bargaining team.

In the 60s, activists like Dr. Martin Luther King, Jr., Rosa Parks, Bayard Rustin, and Malcolm X led the Civil Rights movement, which also advocated for expanded workers’ rights. In your opinion, what groups or leaders stand out as being at forefront in the fight for equality and justice now?

Leaders like Reverend William Barber, President of the North Carolina NAACP and founder of the “Forward Together Movement,” the Advancement Project, DEMOS, and many African American labor activists, like myself, are now at the forefront in the fight for equality and justice. Through the Labor Commission on Race and Economic Justice, UFCW International President Marc Perrone and Fred Redmon, Vice President of the United Steelworkers, are at the forefront in leading the conversation and work to dismantle racism within the labor movement.

Also, in today’s era of social media, movements like Color of Change, Not One More Deportation, Black Lives Matter, Black Youth Project 100, and the Dream Defenders have sparked a new generation of advocates for racial and social equality. Many of these young leaders are also leading in the labor movement. Alicia Garza, co-founder of Black Lives Matter is Special Projects Director for the National Domestic Workers Alliance, Carmen Berkley, cofounder of Black Youth Project 100, is Human, Civil and Women’s Rights Director for the AFL-CIO, and Greg Cendana is a young, openly gay Asian American activist and Executive Director of the Asian Pacific American Labor Alliance.

Through their civil rights, community and union activity, these millennials are leading the charge to expose and dismantle a racist system that disenfranchises communities of color.

The labor movement has a rich tradition of fighting inequities that extend beyond the workplace. In what way do labor and civil rights intersect and how can unions help narrow the income and equality divide that disproportionately affect African Americans and other minorities?

Negroes in the United States read this history of labor and find it mirrors their own experience. We are confronted by powerful forces telling us to rely on the good will and understanding of those who profit by exploiting us…. They are shocked that action organizations, sit-ins, civil disobedience, and protests are becoming our everyday tools, just as strikes, demonstrations and union organization became yours to insure that bargaining power genuinely existed on both sides of the table… Our needs are identical with labor’s needs: decent wages, fair working conditions, livable housing, old age security, and health and welfare measures… That is why Negroes support labor’s demands and fight laws which curb labor. That is why the labor-hater and labor-baiter is virtually always a twin-headed creature spewing anti-Negro epithets from one mouth and anti-labor propaganda from the other mouth.

These words stand true even today: the success of the civil rights movement as well as the labor movement is the ability to work together in order to move a vigorous agenda that addresses institutional and generational racism, worker exploitation, and social and economic inequality.

Just as Black Lives Matter and today’s Black Liberation movement share agendas that include workers’ rights and union protections, the labor movement must adopt and move a robust civil rights agenda that includes the voices of Black, Latino, Women, Asian, and LGBTQ workers. It must be an agenda that moves campaigns to declare that all workers can earn a better wage, regardless of the level of their education. All workers have a right to paid sick leave and paid family leave. An agenda that works to protect all workers against discrimination based on the color of their skin, their nationality, their self-identity or sexual orientation, or past incarceration or criminal record. Labor should move an agenda that promotes equal pay for all workers regardless of gender, their place of employment or past criminal record. Labor should move an agenda that works with the civil rights movement to protect the right to vote for all people.

The work of the Labor Commission on Race and Economic Justice is only the beginning of a process to address discrimination. Labor can no longer be silent about the attacks on Black communities. Labor must become true allies of the civil rights movement. For the enemies of the labor movement are the same enemies of the civil rights movement, and neither movement can win without the other…

With cases like Friedrichs v. California Teachers Association and expansion of Right to Work, labor cannot withstand the attacks on the movement without joining a greater movement for social and economic justice. The two movements must show up for each other, “For in the End, we will not remember the words of our enemies, but the silence of our friends”…words of Dr. Martin Luther King, Jr.