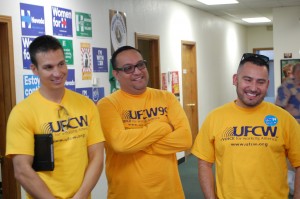 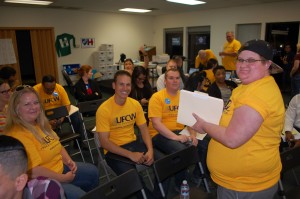 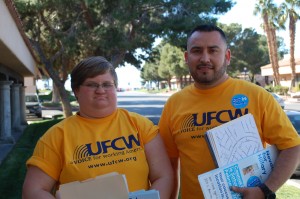 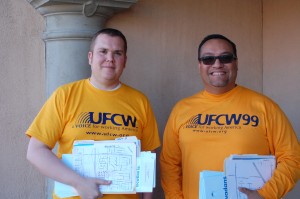 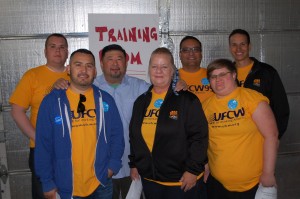 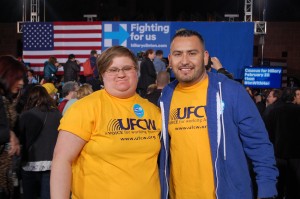 UFCW members spent the past week in Nevada canvassing, phone calling and helping to pull Hillary Clinton to a strong primary victory in the Silver State. Exit polls showed union members supporting Hillary Clinton over Bernie Sanders by more than 10 points – proving decisively that UFCW’s efforts on the ground made a big difference.

UFCW members on the ground in Las Vegas shared why they think it’s so crucial for our entire union family to be involved and engaged in this election.

“We need to make a difference in our community. We can’t do that by sitting out, so we’re here trying to get as many people as possible excited and engaged about this election.”

“We need to raise the bar for low wages. People just aren’t making enough to survive. We need to make sure more and more people can find a job that pays a decent, living wage.”

“The best way to make our politics better is to be involved. All day we’ve been talking about issues, and one of the top concerns is better scheduling. People need schedules that provide them with full-time hours. It’s unacceptable and sad to see families working two jobs just to get by because it brings them absolutely no life outside of work.”

“Sometimes we talk to people who feel like their involvement doesn’t matter because they don’t think they can make a difference. That’s wrong. We matter. Our voice matters. When we don’t get involved, that’s when we lose.”

“The most important thing to me is workers’ rights. It’s time for us all to have higher wages. The best way to do that is to support unions. The stakes of this election are extremely high. We’re up against people who want to destroy us. The more people who decide to vote and caucus the better.”

“UFCW members need to understand how powerful they are. We can make or break an election. We can get the candidates who fight for us elected. We just have to vote.”

“What I realized talking to voters and UFCW members in Nevada was that people are craving results. Whether it’s higher wages, better health care or comprehensive immigration reform – everyone is tired of not feeling strong improvement in their communities and lives. The biggest reason Hillary Clinton earned the support of Nevada voters was her history of success – she can deliver the results that we deserve.”

“There are many important issues. Make America strong and get families back to work into good paying jobs. We need to keep moving forward and progressing as a country.”

“I believe that being involved in politics is something that all of us have to do. I know that some people feel like their vote doesn’t count, but they’re wrong. That’s why we’re out here talking to our brothers and sisters. If more of us vote and get involved we can make life better in this entire community and beyond. That’s something to be proud of.”

“To me, health care is the top issue because I have eight kids. If I didn’t have strong union health care it would be off the charts unaffordable. Affordable health care is really the key to getting by, because without it a sudden medical event can wipe you out.”