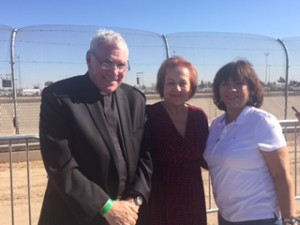 Esther at the border with Father Klete Kiley, Director of Immigration Services, and Maria Elena Durazo, Executive Vice President, both at UNITE HERE

The delegation began its day-long Pilgrimage at the Cathedral in Ciudad Juárez. Carrying banners and flowers, the delegation walked to El Paso to amplify Pope Francis’s urgent call for compassion for migrants and refugees, and bring attention to unjust and inhumane immigration enforcement policies.

“In a city with one of the highest rates of denial for asylum seekers in the country, the labor movement is here to amplify the Pope’s unifying message of solidarity and demand more humane, people-centered trade and immigration policies,” López said.

The pilgrimage was a follow-up to last year’s action, where 100 women walked 100 miles from a detention center in Pennsylvania to welcome Pope Francis during his visit to Washington, D.C.