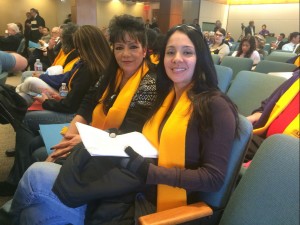 For the second year in a row, an aggressive lobbying effort from UFCW Local 1564 helped to keep “right to work” out of New Mexico.

More than 50 members from UFCW Local 1564 spent an entire day inside the State Capitol lobbying their legislators and packing into a committee room where the “right to work” bill was being considered.

Rose Gonzalez, a 29-year member of UFCW Local 1564 who works at Smith’s in Los Lunes, and her daughter, Missy, testified in front of the committee about the dangers of “right to work.”

“I am here because I want and deserve to retire with dignity,” said Gonzalez. “It is a slap in the face for me to see my 30 years of hard work threatened by an unfair law whose only real supporters are outside special interests. It is a fact that people in ‘right to work’ states earn less money – to see any cut in pay would devastate me and my family. I already rely on every bit of every paycheck. Any pay cut would require me to get another job.”

Rose’s concerns about how much worse life would be in New Mexico with a “right to work” law were echoed by her daughter, Missy.

“I’m here because my mother has been a single parent for years and relied upon the grocery business and her union to raise me and my siblings. If ‘right to work’ passes in New Mexico, I worry that fewer families would have the opportunities that she had. I’m here supporting my mother today because I am proud of her and I know she works too hard to see her hard-earned wages and benefits cut by this unfair law.” 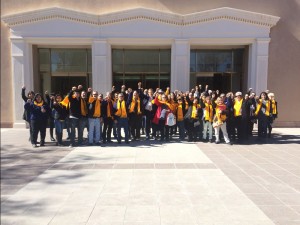 The successful lobbying work by UFCW Local 1564 went well beyond just a single day. For weeks, they engaged in an aggressive worksite campaign to mobilize the entire membership against “right to work.” Thanks to this effort, 961 handwritten letters from members opposed to “right to work” were delivered to State Senators and Representatives.

As a majority of the committee voted to table “right to work,” effectively ending the threat of the unfair law passing this year in New Mexico, UFCW Local 1564 members cheered knowing that their hard work had made a difference for workers all across the state.