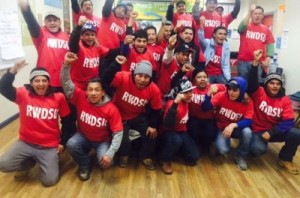 The workers at SLS car wash in Bushwick in Brooklyn, New York, have seen the difference that union membership has made for hundreds of car wash workers in New York City since the Car Wash Campaign began in 2012. Now, they’ve made SLS Car Wash the 11th car wash facility in New York, where workers are represented by the RWDSU. SLS, also known as Atlantis Wash & Lube, has about 50 workers and is the largest car wash in the country to unionize. Nine shops have signed contracts.

Determined workers and RWDSU organizers braved the cold winter during the organizing drive. By handing out information and talking with workers, the organizing leaders were able to rally increasing support. Workers voted overwhelmingly in favor of joining the union. They wanted a change after years of mistreatment.

“Before we organized a union we worked under a lot of stress,” SLS worker Cheik Umat Balde said. “The managers will always yell at us to work faster. Sometimes they will call us stupid.  We had to deal with unknown chemicals with no protections. Now, with a union we will be protected – but most importantly, we will have respect and dignity, and that to me is priceless.”

A coworker, Ramon Carcamo, who has been at SLS for six years said, “I decided to organize with my coworkers to change the working conditions at the car wash because I knew that we had rights that we were not getting. Now, with a union, the car wash managers will have to treat all of us with respect. We knew that if we were united, no one could silence our voice for justice and claim our rights at work.”

The Car Wash Campaign, a coalition of New York Communities for Change, Make the Road New York and the RWDSU, have been advocating on behalf of workers in New York City’s largely unregulated car wash industry for nearly four years.