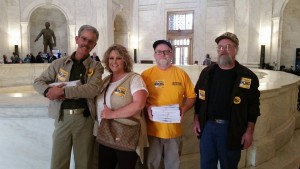 Mark Federici, President of UFCW Local 400, issued the following statement in response to the vote:

“Today’s partisan vote by the West Virginia state legislature is a major step backward for working families in West Virginia.

“Our members spent weeks placing calls to delegates and lobbying legislators in both chambers to oppose the bill. We even delivered more than 500 handwritten letters to legislators gathered from members in Kroger stores across the state urging them to oppose ‘right to work.’

“But instead of listening to hard-working men and women that live, work, and vote in West Virginia, the legislature instead chose to bow to pressure from outside special interest groups backed by the infamous, billionaire Koch brothers.

“As a union with members in ‘right-to-work’ states, we know all too well the harm of this anti-worker legislation. Just over the mountains in Virginia, our members already suffer the everyday consequences of ‘right to work’ legislation.

“Our members in Virginia earn as much as $2 less per hour, pay up to five times more out-of-pocket for benefits, and earn up to one week less vacation each year than their brothers and sisters in West Virginia – even working for the same company, doing the same job, with the same experience. The difference? Virginia is a ‘right-to-work’ state.

“This bill has nothing to do with ‘workplace freedom’ and everything to do with diminishing the power of working people to negotiate for a better life. The bottom line is “right to work” will make it much more difficult for hard-working men and women to earn better wages, secure family-supporting benefits, or ensure proper safety in the workplace.

“We look forward to Governor Tomblin’s veto of this dangerous, deceptive legislation, and we will continue to hold our elected leaders accountable to voters and uphold the veto when the bill inevitably returns to the legislature.”