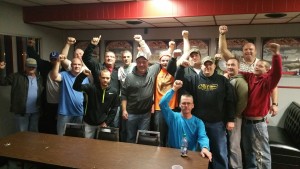 By a more than 4 to 1 margin, workers at Heritage WTI in East Liverpool, Ohio, have voted to form a union with the International Chemical Workers Union Council (ICWUC) of the UFCW. Operations workers at the company, who perform hazardous incineration, finally prevailed in their union effort on November 20 after two previous unsuccessful organizing drives.

Jeff Owens, a 14-year veteran of the plant, partially credited recent legal changes that enabled just the operations workers to form a union and a shortened election period that didn’t let the company intimidate workers into voting “no” with their victory.

“We stuck together and knew what the company had done last time. They spread falsehoods and negativity about the union, but when we voted no they proceeded to systematically reduce our benefits and pay, so we knew they weren’t telling the truth,” said Owens. “We just wanted to be treated with respect and be recognized for the extremely dangerous work we do.”

Workers at the plan use a huge incinerator, or kiln, to dispose of chemicals and waste that most people don’t even want to come near.

“By forming our union, we’re going to stand up for better wages and better benefits,” said Owens. “We’re going to be able to support our families better and get the compensation we’ve earned for our hard work.”