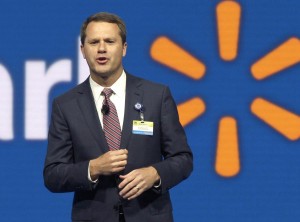 Walmart Store, Inc., Chief Executive Officer Doug McMillon speaks at the Walmart shareholder meeting in Fayetteville, Ark. Walmart on Wednesday, Oct. 14, 2015 said it expects profit to fall for its next fiscal year and cut its sales outlook for this year as it works to fend off intensifying competition and perk up stores with better customer service. (AP Photo/Danny Johnston, File)

Last week, the Making Change at Walmart (MCAW) campaign released the following statement responding to news that the company announced it was predicting a drop in annual profit – an announcement that led to shares of Walmart dropping to their lowest point in three years.

“Walmart should be ashamed for trying to blame its failures on the so-called wage increases. The truth is that many hard-working Walmart employees all across the country began seeing their hours cut soon after the new wages were announced. The idea that this truly drove down Walmart’s profits is a fairytale,” said Jess Levin, communications director for MCAW. “The reality is that customers want a Walmart to reflect their values, and until that changes the company will continue to struggle. It is time for Walmart and other retailers to wake up and hear the change the American people and their customers want.”

MCAW released two ads earlier last week that highlighted the struggles that many Walmart and retail workers face every day. Those ads, “Replaceable” and “Real Change,” debuted during the Democratic debate Tuesday night and continued to run nationally throughout the week.