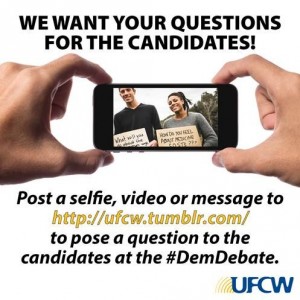 Last week the UFCW launched an online grassroots social media campaign asking UFCW members and other hard-working men and women to submit their questions and concerns to 2016 presidential candidates.

The goal of the #AnswerMyQuestions2016 campaign is to pressure 2016 presidential candidates, Democrat and Republican, to answer the tough questions that truly matter to our members and all hard-working families – whether they are union members or not.

The first phase of the #AnswerMyQuestion2016 initiative focused on Democratic candidates participating in their first debate in Las Vegas on October 13.

Using the hashtags #AnswerMyQuestion2016 and #DemDebate, UFCW members, supporters, and everyday Americans are encouraged to submit any questions they have for the presidential candidates. Questions asked through Tweets, photos, videos, and all other forms of social media creativity will be accepted – if it is hashtagged, we will find it.

As part of an effort to focus on the issues that matter to hard-working families, questions will posted on UFCW’s Tumblr page (ufcw.tumblr.com).

The goal of this effort is to ensure that candidates are answering real questions from real people and are held accountable for how they will better the lives of everyday Americans if they become President of the United States.