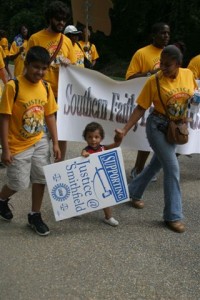 The week, The New York Times featured a study that “suggests that unions may also help children move up the economic ladder.” The paper, written by researchers at Harvard, Wellesley and the Center for American Progress, essentially finds that children born into low-income families have a greater chance of ascending “to higher incomes in metropolitan areas where union membership is higher.”

Beyond the beneficial impact that being part of a union has on parents’ wages, the researchers found that this trend is also attributed to the fact that “unions are effective at pushing the political system to deliver policies — like a higher minimum wage and greater spending on schools and other government programs — that broadly benefit workers.” Perhaps the best and most recent examples of this are seen in San Francisco, Seattle, and New York, where the minimum wage has been raised significantly.

The study also found that “children with fathers who belong to a union have significantly higher wages than children who don’t. But when it’s the mother who belongs to a union, only the wages of daughters rise.”

When trying to determine why, the Times notes that “it’s possible that the explanation is sociological: Daughters with a mother who belongs to a union may be more likely to work themselves, which means they’re more likely to have higher wages. Or, put differently, union membership is helping to change social norms.”