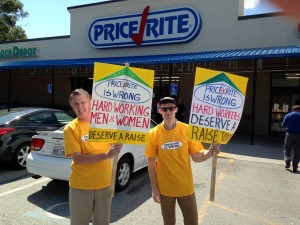 UFCW locals launched a regional worker campaign aimed at Wakefern Food Cooperation’s PriceRite grocery store brand. As part of this regional effort, UFCW locals across Maryland, Pennsylvania, New York, Massachusetts, Connecticut, and Rhode Island are partnering with Jobs with Justice’s local affiliates, the New York Coalition for Economic Justice and Connecticut Central Labor Council and other community groups to engage and support a broad and growing coalition of local PriceRite workers. The coalition is joining together to fight for better wages and benefits, and a better life for all of America’s hard workers and working families.

“PriceRite must be held accountable to its workers and the communities they serve. Low-wage paying jobs in poor communities are part of the problem and America’s men and women deserve better because they earn it with their hard work,” said, Leo F. Alcuri, UFCW Local One Assistant Director of Organizing and lead in the Western NY region PriceRite worker coalition.

The campaign to change PriceRite, just like the fight to change companies like Walmart, will utilize a series of tactics and tools to mobilize and engage the local community. This regional effort is part of a national retail and worker movement fighting for higher wages, more hours, consistent scheduling, and respect on the job. 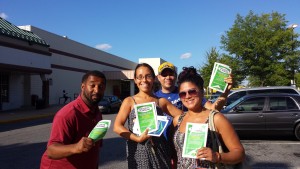 “We are joining a national movement aimed at changing companies for the better,” said Tom Clarke, UFCW Region 1 Director. “PriceRite workers will be lifting the voices of workers in food retail with the support of advocates that have been leading the retail and fast food worker movement.”

PriceRite runs 58 non-union stores across eight states. Among the issues affecting many of the workers in the area are low wages, inconsistent scheduling, unpaid sick leave, and other poor employment practices proliferated by stores like PriceRite.