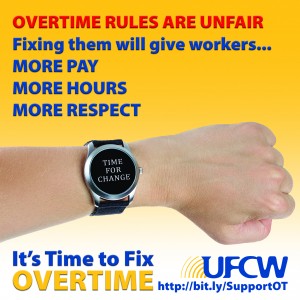 Currently, a salaried employee making as little as $24,000 per year is exempt from earning overtime pay – 1.5 times their hourly wage – when they work more than 40 hours in a week. The Department of Labor has proposed raising the overtime eligibility threshold to $50,440 to help fix this problem.

Last week, The Hill published an op-ed by UFCW International President Marc Perrone regarding the new overtime regulation that will increase the overtime salary threshold and extend overtime protection to almost 5 million additional Americans. The full op-ed can also be read here.

“Every day, millions of hard-working Americans wake up to the realization that they will work more than 40 hours per week, but will not compensated for their hard work. Even though employers have to provide overtime pay to employees who work more than 40 hours per week under the Fair Labor Standards Act, many salaried workers are exempt. While it may be hard to believe that this is still possible, it may have to do with the simple fact that salary threshold for overtime pay has been raised only once since 1975.

“How low is the threshold for these workers? The exact threshold is $23,660, which is lower – if you can believe – than the federal poverty level for a family of four. Even worse, because the overtime regulation has not been updated and adjusted for inflation, it has allowed employers to classify workers with salaries as low as $24,000. These are workers that have very low level supervisory authority, even though many will essentially perform the same work as their hourly coworkers. As a result, employers have used this overtime exemption to their advantage by requiring these low level supervisors to work for free after 40 hours.

“The new overtime regulation will increase the overtime salary threshold to $50,440 per year by 2016, and extend overtime protection to almost 5 million additional Americans.
Under the new regulation, some workers will no longer be required to work long hours for no pay, and that means they can spend more time at home with their families or they can get paid for the work they do. Others will get a pay increase in the form of time-and-a-half pay for overtime work. As to be expected, some workers will get a salary bump to exceed the new threshold. And in what could help spur the creation of countless of jobs, hard-working Americans who are struggling in low-wage, part-time jobs may see those jobs converted to full-time work, while some unemployed workers will get a new job when employers increase hiring to “spread the work.”

“While executive actions will not solve the fundamental economic challenges facing millions of families across this country, this new regulation is one of the most significant steps the Obama Administration can take on its own. It will also help cement a basic American value enshrined within the Fair Labor Standards Act that men and women who do the hard work would receive a fair day’s pay for a fair day’s work.

“While it is clear there are many areas our elected leaders must address to truly improve the lives of every hard-working American—such as paid leave, the minimum wage and fair scheduling—one would hope our elected leaders, especially Republican Members of Congress and leadership, would remember that no American in this day and age should ever be exploited simply because they want a job.

“Those who oppose this rule change will have difficulty explaining why to their salaried workers in their districts and states, and that’s something to look for as we approach the 2016 election.”

You can help support expanding overtime eligibility rules by signing and sharing the UFCW petition.