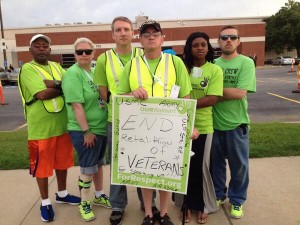 OUR Vets, a nationwide organization of Walmart associates who have served in the armed forces, held a rally in response to Walmart denying OUR Vets’ request to allow Walmart associates to wear R.E.D. (Remember Everyone Deployed) shirts on Fridays in exchange for a donation to the Wounded Warrior Project. The rally took place on July 3, in front of a Walmart in Clovis, N.M.

“Walmart has said it supports veterans and our deployed military,” said Meg Jenkins, an OUR Vets member who served from 1992 to 1995 at the Patuxent River Naval Health Clinic and has been working at  Walmart as an overnight stocker for four years . “Now it’s time for them to show it by letting associates donate to help our wounded soldiers.”