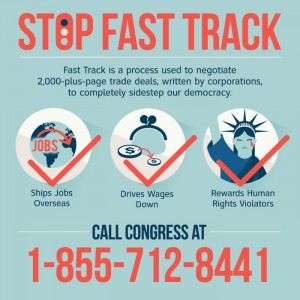 In light of an expected vote on fast track in the U.S. Senate, UFCW International President Marc Perrone, today released a letter to all 100 members of the U.S. Senate urging them to vote no on the stand-alone Trade Promotion Authority (TPA) bill, also known as fast track. The final vote is scheduled to take place Wednesday evening.

The Senate letter is the latest action taken by the UFCW and its 1.3 million members to highlight the negative impact that TPA and TPP will have on the country. This week, UFCW members are mobilizing in every state to reach out and convince their Senators to stop this stand-alone fast track bill.

The full letter from Marc Perrone is copied below.

On behalf of the 1.3 million hard-working members of the United Food and Commercial Workers International Union (UFCW), I am writing to strongly urge you to oppose the stand-alone Trade Promotion Authority bill, also known as fast track.

The debate over fast track and the Trans Pacific Partnership (TPP) is not one defined by party or partisanship. Nor is it about the President or his agenda. This debate is about whether or not our elected officials will stand with the millions of workers and hard-working families who oppose this trade deal because it is they – not those in Washington – who will ultimately bear the burden of its aftermath.

This current stand-alone fast track bill is even worse for workers than the previous Senate bill you voted on a few weeks ago. It gives no guarantee that workers who will lose their jobs and income due to unfair trade deals get assistance. Worse yet, this bill fails to address currency manipulation, climate change, human trafficking, or countries who refuse to play by the rules when it comes to labor standards.

Simply put, no Democrat or Republican should be willing to cede their legislative responsibilities to President Obama, multinational corporations, or special interests and insiders who have negotiated this deal in secret.

While it is easy to rationalize that this trade deal will be different, the facts and history are quite clear. If TPP passes, we can expect more American workers will lose their jobs, more families will struggle, wages will be driven even lower and income inequality will worsen.

Instead of barreling towards another unfair trade deal that will fail America’s hard-working men and women, the Senate should slow down and work to pass a responsible bill that will truly protect our economy, our workers and their families.

Make no mistake, your constituents, our members, and the American people will remember who stood against this trade deal and who did not. For the sake of the better America we must all believe in, please do what is right for the hard-working families you have sworn to serve and vote no on fast track.