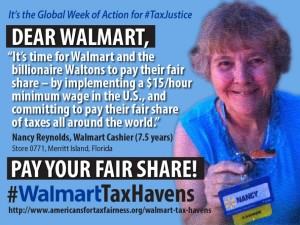 Americans for Tax Fairness has released a new report that sheds light on Walmart’s placement of at least $76 billion in assets into an elaborate, undisclosed web of 78 subsidiaries and branches in 15 offshore tax havens, which may be used to minimize foreign taxes where it has retail operations and avoid U.S. taxes on those foreign earnings.

The report, titled The Walmart Web: How the World’s Biggest Corporation Secretly Uses Tax Havens to Dodge Taxes, shows that the retail giant has made tax havens central to its growing International division, which now accounts for one-third of the company’s profits. Walmart’s network of 78 undisclosed overseas subsidiaries in tax havens have no retail operations and few, if any, employees. Twenty-two of these paper companies are in Luxembourg alone, a country that plays a central role in the company’s tax haven network.

The retail giant has avoided scrutiny of its international tax dodging in the past by declining to disclose its tax haven subsidiaries on Exhibit 21 (“Subsidiaries”) of the company’s annual 10-K filing with the U.S. Securities and Exchange Commission.

“Companies use tax havens to dodge taxes. It appears that’s the secret game Walmart is playing,”said Frank Clemente, executive director of Americans for Tax Fairness. “We are calling on Congress, federal agencies and international organizations to determine if Walmart is skirting the law when it comes to reporting its use of tax havens, using various schemes to dodge taxes, and getting a sweetheart deal from Luxembourg that is the equivalent of illegal state aid. Average Americans and small businesses have to make up the difference when Walmart doesn’t pay its fair share of taxes.”