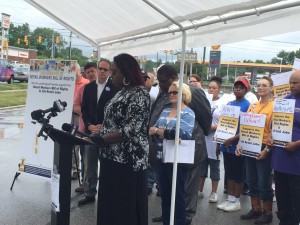 On June 17, members of the newly formed Lift Retail Jobs Campaign, held a press conference to highlight the economic plight of local retail workers and  unveiled a Retail Workers’ Bill of Rights. The Lift Retail Jobs Campaign is a coalition of retail workers, local businesses, and community groups who  have a vested interest in improving the quality of retail jobs in Indianapolis.

The newly launched campaign is challenging retailers in Indianapolis to be better corporate citizens and support a Bill of Rights for retail workers which  promotes workplace protections so that all workers in this growing industry have a pathway to the middle class. The workplace protections include full-time work and access to hours; fair scheduling practices; access to healthcare benefits; and paid sick leave for both full and part-time workers.

Debra Hill, a retail worker with more than 20 years of experience in the industry, addressed the media and the assembled crowd of nearly 100 workers  and community supporters.

Hill presented members of the Indianapolis City-County Council, including Pamela Hickman, Monroe Gray, and Kip Tew, with a copy of the Retail Workers’ Bill of Rights.

The retail industry in Indianapolis is one of the fastest growing sectors of the economy and a significant employer of women and people of color; but many of these jobs are low-wage, part-time positions with erratic hours that are preventing retail workers from climbing up the economic ladder. A recent study conducted by the research and policy center Demos and the National Association for the Advancement of Colored People (NAACP) notes that, nationwide, people of color in the retail industry are often relegated to lower-paid positions and given fewer hours. Thirty percent of women in the retail industry live in poverty or near poverty.

Jessica Dixon has 16 years of retail experience in Indianapolis. “When you work in the retail industry, you sacrifice so much for so little. The pay is low, scheduling is unpredictable, we don’t share in the company’s success when they profit, and we’re treated like we’re disposable,” Dixon said.  “A Retail Workers’ Bill of Rights would protect our rights and make it possible for people like me to imagine a future in this industry.”

For more information about the Lift Retail Jobs Campaign and the Retail Workers’ Bill of Rights, visit www.LiftRetailJobs.org.