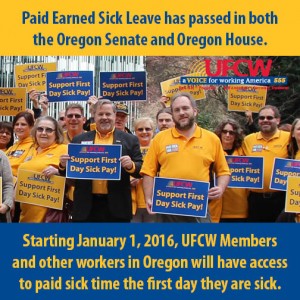 On June 12, the Oregon House passed paid earned sick leave legislation after successfully moving through the Oregon Senate. The bill will now be sent to Democratic Gov. Kate Brown to be signed into law.

“For more than three and a half years, UFCW Local 555 members have made passing a statewide paid earned sick leave law a top priority. From the very beginning, helping first to pass this law in both Portland and Eugene, members were on the front lines of this fight because we believe that everyone can be healthier and more productive when they are given ample time to recover from sickness,” said UFCW Local 555 President Dan Clay.

Members donated time and resources to lobby on behalf of paid earned sick leave and provide printed materials to support the campaign.

UFCW Local 555 is now working with allied organizations in Washington to bring paid earned sick leave to members in southwest Washington, as well as other workers in the area.