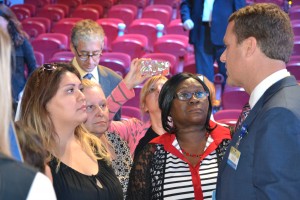 Following two weeks of events in cities across the country, Walmart workers held a series of public actions at Walmart’s HQ, as well as at the company’s annual shareholder meeting. During the events, Walmart workers called on the company to make immediate changes across an array of issues, including increasing hourly wages and ending workplace intimidation.

“The time has come for Walmart to take real actions to help improve the lives of Walmart workers and their families. It is simply wrong for Walmart to ignore our calls for change and look the other way as hundreds of thousands of hard-working associates continue to struggle to make ends meet. Walmart must change, and it must change now,” said Cindy Murray, a current Walmart associate.

As part of the actions at the shareholder meeting, Walmart workers called on the company to help lift hundreds of thousands of their dedicated employees out of poverty by paying a living wage, as well as providing stable full-time hours for all associates.

Two leaders of the workers group, also presented two resolutions intended to rein in executive compensation and incentivize sustainable investment, such as fair wages and benefits for all workers across Walmart. The resolutions, including a proposal supported by the Sierra Club, also called on Walmart to reduce greenhouse gas emissions produced by international marine shipping.

“Despite some recent efforts on the company’s part to reduce its carbon footprint, Walmart is still one of the largest and fastest-growing polluters in the country,” said Michael Brune, Executive Director of the Sierra Club. “If Walmart is really serious about driving climate solutions, they should put their money where their mouth is, by setting goals for reducing greenhouse gas emissions from international marine shipping, reporting progress toward those goals to their shareholders, and setting a deadline for 2020 to meet their commitment for 100% clean energy in the U.S.”

During the shareholder’s meeting, the Walmart workers proposed a new policy establishing an independent chairperson for Walmart’s Board of Directors, and called on company leaders to immediately address the recent closure of stores and the laying off of more than 2,200 Walmart workers around the country.

Ms. Luna worked at the first Walmart store to strike in 2012 and one of five stores the company abruptly closed in April, citing “plumbing issues.” More than 2,000 workers were laid off following these sudden closures.

“Our fight to change Walmart will never stop until Walmart does the right thing for all its workers and their families. We’re going to continue to speak out until every hard-working associate is paid a real living wage, full time work that allows them to support their families, and is allowed to stand with their co-workers without fear of retaliation.” said Mary Watkines, a 15-year Walmart associate and shareholder.