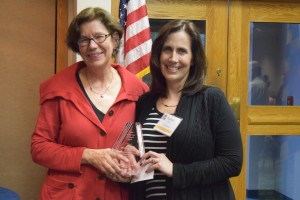 In recognition of her efforts to make Walmart a safer place to work, Walmart worker Barbara Gertz was presented with the Health and Safety Organizer Award at the National Conference on Worker Health and Safety on June 3 at the Maritime Institute in Baltimore.

Gertz has worked at her local Walmart for six and a half years. Two and a half years ago, Gertz began speaking out because she was concerned about the number of workers who were being injured; in particular, she was troubled by the many repetitive motion injuries suffered by co-workers. Gertz herself suffered an injury and did not like the way she or other injured Walmart workers were treated.

Gertz created and spearheaded a National Safety and Health Committee of Walmart workers which meets via webex weekly to conduct seminars on safety and health, as well as discuss strategies for connecting with workers.

“Barb gets it. She gets that workers have power when they work together and they are educated,” said UFCW Safety and Health Director Robyn Robbins.

Earlier this year, the committee embarked on a national effort to collect OSHA 300 logs from Walmart stores around the country. Gertz and worker leaders are now working to analyze the data and form new strategies for making the workplace safer.

“It’s been a really exciting two years,” said Gertz. “First of all, I would have to say this committee really couldn’t exist if it weren’t for the hard work and support and encouragement of all the UFCW members. So thank you for supporting us. Fighting Walmart is not easy.”

“I work overnights and I come home and I get on the computer at 7:30 in the morning and sometimes I wind up going to bed at 6pm just because there are so many workers to help. But it has to be done. “