Mexican Workers Protest Against Chedraui in Mexico City in Support of El Super Workers in the U.S. 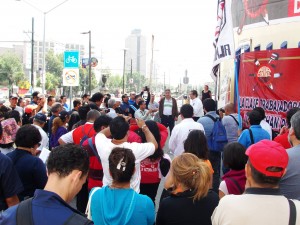 More than 150 members of Mexican trade unions protested against Grupo Comercial Chedraui in Mexico City as part of the International Day of Action in Solidarity for El Super employees in the U.S.

More than 150 members of Mexican trade unions participated last week in a demonstration against Grupo Comercial Chedraui in Mexico City to protest unfair working conditions at El Super stores in California, Arizona, and Nevada. This protest was part of the International Day of Action in Solidarity with El Super employees.

The demonstration took place on June 4, in front of a Chedraui store near Paseo de la Reforma Avenue. Rigo Valdez, organizing director from UFCW Local 770 explained to the Mexican union members that, “the boycott of El Super will continue until the company gets back to the bargaining table and comes to an agreement with the union.”

At the same time, thousands of allies of El Super workers in the United States and Canada signed an online petition, which was launched in English and Spanish by the Justice for El Super Workers campaign. Within the first three hours, the petition reached its goal of 10,000 signatures.  At the time of this report, the online action had gathered 22,815 signatures.

To support El Super workers, click here to add your name to the petition.