UFCW Local 367 Fights to Stop Fast Track and the TPP 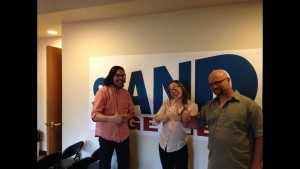 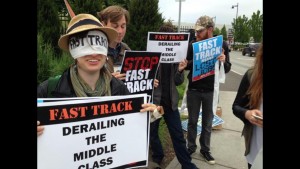 At their office in Tacoma, Wash., UFCW Local 367 has been busy hosting and organizing phone banks to rally people across the state against fast tracking the Trans-Pacific Partnership (TPP).

Every Thursday, staff members from UFCW Local 367 phone bank for a few hours and then throughout the week, members from the UFCW and other labor unions drop-in to donate what time they can on the phones.

“The TPP is a broad issue that will impact every aspect of our economy and our workforce,” said Nathe Lawver, UFCW Local 367’s Communications Director. “Our Local represents retail workers in the most trade dependent state in the union. A bad trade deal that’s as big as this one has the potential to cause a lot of pain in our area so we started phone banking to help educate people and hopefully stop this unfair agreement from passing.”

Actions like this have been a crucial component of the fight against the TPP because Washington State has multiple members of Congress who are undecided on the issue of trade. UFCW Local 367 is hoping that their phone bank efforts will encourage more people to speak with their member of Congress about not passing unfair trade deals like the TPP.

“We can see from experience that when trade deals have labor and environmental standards that fall short, it’s American workers who suffer,” said Lawver. “What little we have seen about this secret agreement points towards the TPP being another pro-corporate trade deal with low standards. Anyone who likes to eat safe food, have a roof over their head, and work for fair pay needs to be actively fighting against the TPP.”